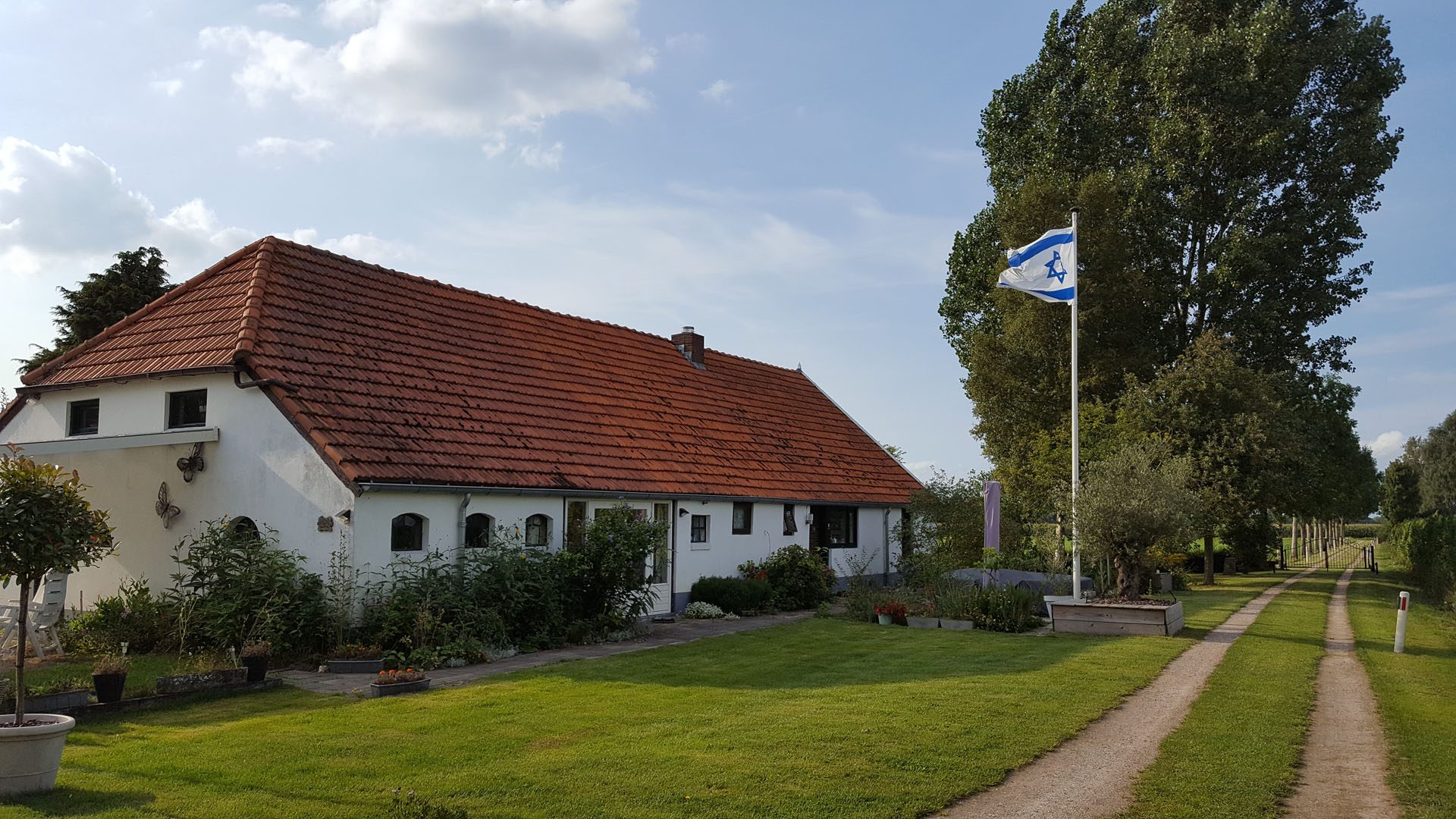 “Am Israël Chai International”, the initiative of the Dutch kehila Beit Emoenah continues with the action “Jerusalem Israel Ring”  around Jerusalem and thus in Judea and Samaria as a symbol for all of Erets Israel.
It is the second initiative of planting 1000 olive trees to encourage the people of Israël. The first 1000 trees were planted in the “Hadar Goldin Ring” initiative, distributed over 10 mosjavim in the Gaza envelope.
This second part, the “Jerusalem Israël Ring” will be planted as a ring around Jerusalem.
We started already in Mitzpe Yair and Adora and now continue in Mevo Modiin.

As it is so beautifully expressed in the Eighteen Prayer:

Blow the great trumpet for our freedom and stick on the sign for the collection of our exiles, and collect us together, from the four corners of the earth. Blessed You, Lord, who collects the scattered of His people Israel.

And return in mercy to Jerusalem, Your city, and d’ing in it, as You have spoken; Soon in our days, build it into a building forever, and soon prepare in her the seat of David.

Mevo Modiin is the well-known mosjav of the Hasidic rabbi Shlomo Carlebach. Carlebach is considered by many to be the most important Jewish religious songwriter of the 20th century. Carlebach was also considered a pioneer of the Bale teshuva movement (“returned to Judaism”), which encouraged disenchanted Jewish youth to re-embrace their heritage, using his special style of enlightened education, and telling his melodies, songs and very inspiring stories.

The mosjav was founded in 1975 by Rabbi Carlebach, who lived there in the later years of his life. Some residents came to the village from Jerusalem as a group, towards Carlebach. Many came from or through the former House of Love and Prayer, which was first founded in San Francisco and later in Jerusalem. The group is a collection of eclectic individuals, including musicians, artists, organic farmers, winemakers, perfumers and specialists in many fields. Many excel in their field throughout Israel.

On May 23, 2019, a large fire destroyed most of Mevo Modi’im – forty of the fifty houses. Probably as a result of terrorist arson because at least four individual origins of fire were found.

After this fire, the mosjav remained largely uninhabited until recently because only a few houses remained habitable. However, the fleeing residents have now returned and live in mobile homes at the entrance to the mosjav. They are busy rebuilding the mosjav. As a statement Am Israel Chai we want to encourage them by planting these olive trees in the context of the Jerusalem Israel Ring.

The trees will be planted around the old wine press in the center of the mosjav near the synagogue.

This follow-up action therefore continues to call attention to the return of all  Israel.”
Israel means to haShem and us: Land, People and Jerusalem as ONE!

Anyone who wants to can participate, either physically for those who are in Israel and can come to Mevo Modiin , or via a Zoom Internet meeting. The link to log in for this will be sent on request, via this contact page of Beit Emoenah.

Of course, this is another step in a whole series of plantations in Judea and Samaria around Jerusalem. To encourage Israel, we will continue with this.

That is why, on behalf of the Am Israel Chai International and Beit Emoenah in The Netherlands, we are making another call:

Join us and show that we believe what HaShem says “Am Israel Chai.”